2006 National Scientific and Technological Awards Ceremony was held in the Great Hall of the People on 27 February 2007. Chinese President Hu Jintao, Premier Wen Jiabao, Vice President Zeng Qinghong, and Li Changchun, member of the Standing Committee of the Political Bureau of the CPC Central Committee attended the ceremony. State Councilor Chen Zhili announced the State Council's decision on the 2006 National Scientific and Technological Awards.
On the recommendation of the State Forestry Administration, the project Research and Demonstration for Key Production Technologies of Bamboo-based Engineering Materials, jointly carried out by International Centre for Bamboo and Rattan (ICBR), Research Institute of Wood Industry of the Chinese Academy of Forestry (RIWI-CAF), Nanjing Forestry University (NFU), Institute of Chemical Industry of Forest Products (ICIFP-CAF), was granted the First Prize of the 2006 National S&T Progress Award. Prof. Jiang Zehui, Board President of ICBR and fellow of International Academy of Wood Science (IAWS), received the award from the state leaders on behalf of the project team. The forestry sector has not seen any project or researcher selected for the first prize of this award for several consecutive years. So this hard-won prize is widely acclaimed as a breakthrough in the field of forestry research, signaling a bright future for the bamboo and rattan S&T advancement. 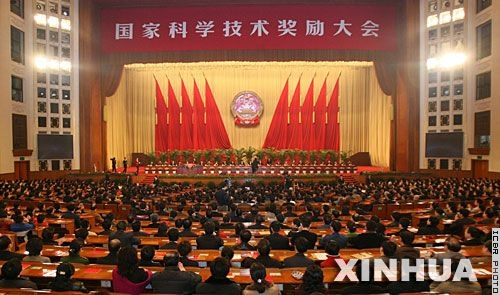